This page has been set up with a focus on some simple and short mini science experiments/activities and using simple scientific questions for the kids to answer.
The task cards are in PDF format and are listed at the bottom of this page.
The focus of these task cards and mini experiments are for lots of discussion and participation to occur rather than lots of writing and form filling.
I am not a Science teacher (and never really understood it if I am being honest) so don't have any experience in really teaching Science (I am a learner, but not afraid of trying new things). However, what I wanted to do was to do something different both as a teacher as well as for the kids I teach.
The below task cards are written and put together from a relieving teachers point of view (having a different class each day) as opposed to a teacher that has a regular class (the same class each day). I wanted to do something where I could start putting a small focus on Science as a reliever. That is, where I could do some fun activities but which could be done in a short period of time. Thus the focus (as a reliever) in writing these has been mainly on the ideas, doing the activity as a whole class, and the main focus being on the discussions surrounding it.
As a reliever, the idea of doing the activity and the discussions that go with it are more important than the paperwork and getting the kids to do a lot of writing on it (as I don't have the time as a reliever especially if I am only in that class for one day). The trick for me is to try and do something different which is fun for the kids but being able to do it in a short period of time.
A lot of the schools I end up in also have various levels in them (such as sole charge and 2 teacher schools), so the activities chosen also had to be suitable for children over various levels (I didn't want some kids in the class to be able to do it and others who couldn't...thus is the reason for trying to keep them simple).
Please note that the experiments/activities on the task cards are not my own ideas. They have simply been put together as a task card so teachers (including myself) can simply print it off and it has everything there, as opposed to running around and trying to put it all together. The task cards needed to have everything there to save time for teachers (which is also what I need as a reliever). The equipment required also had to be easily accessible and/or cheaply purchased (as often teachers are the ones who end up buying it as we all know).
If there is a video of the tasks on You Tube, I have also put the link to those below so you can actually view it before doing it (it certainly helps this old teacher to see it being done visually).
All the task cards below have been tried by me (either before taking it to a class and/or actually having done it in a class), so only experiments/activities that work based on the points mentioned above, are actually put on task cards.
Please note that the task cards do not actually follow the complete steps of a Science Demonstration or  using The Scientific Method (simply because of time). However, parts of each are merged. I don't want the methods to overtake the fun in the short period of time I have, but then again I don't want to not do something new with the class because I know I don't have the time to do all the steps. So all I have done is used the parts I can based on the time I have with the kids. That way, it means I get to do the activities with the class, and hopefully encourage the ideas of Science through the fun of it.
I hope you find some of the ideas helpful and are able to have fun with the class using some of these short science activities/experiments.
There are 3 A4 sheets per Task Card.
The first sheet is usually for the teacher which explains everything (what you need and how to do it). However, with this first sheet, it could also be given to a group of kids to do as an independent experiment/activity (where they do the whole thing without teacher direction, and then that group of kids teaches it to the rest of the class).
The 2nd and 3rd A4 sheets are the student plan and results sheets (these could be backed onto each other). These are the two sheets the children fill out. Note that part of it is intended to be filled out before the experiment/activity, and part of it after it has been completed. These sheets have been written with not too much writing required from the students, on purpose. This is because it is the learning, discussions and conversations that happen between the children during the activity/experiment that is being focused on as opposed to a lot of writing.
I have tried to make it all as simple and hassle free for the teacher as possible, so they can simply focus on doing the task with the class rather than having to run around and get everything organised.
Remember there are no rules except for your own rules, so just use the task cards in any way which best suits you and your class, and have fun.
You are welcome to leave any comments or feedback on my 'Guestbook-Feedback' page.  Cheers, Chris. 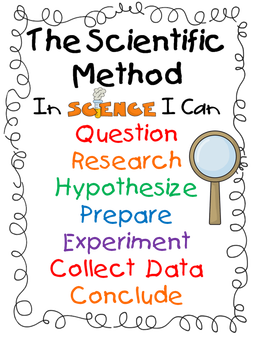